A Quick Introduction to React Hooks 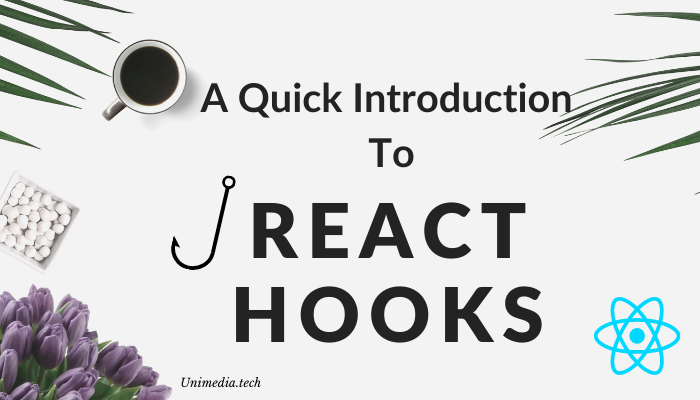 In this article, we will briefly learn what React Hooks are, the types of hooks, and also basic examples of using some of these hooks in your React app.

You may also be interested in: “Stripe Checkout Integration with React”

What Are React Hooks?

React Hooks are built-in functions that allow you to use state within function components. Introduced as special APIs in the React 16.8 version released in 2019, Hooks will allow you to ‘hook into’ React features such as lifecycle methods. A feat that was previously only possible using class components.

React Hooks are incredibly powerful because they allow React developers to transform stateless functional components from just rendering reusable UIs to being capable of saving and maintaining state and logic. Before that, developers found it hard to reuse logic and share state between class components without using even more complex react abstractions. React Hooks made it possible to extract both stateful logic between components.

In summary, here are benefits that developers gained from the introduction of React Hooks.

There are various types of in-built react hooks. You can even create your own Custom Hooks containing your own desired functional logic, which you can reuse across different components.

The React 16.8 release came with ten built-in hooks categorized into two:  Basic Hooks and Additional Hooks. Of these hooks, we will examine two hooks that are the most commonly used: useState and useEffect.

The useState Hook is the most popular React hook. It allows you to ‘use state’ in a function component. This means you can read, manipulate and update state using the useState Hook.

A basic rendition of the useState Hook is shown below:

For example, the sample above has a state which is initially the same value as initialState. The initialState can take a number, string, or even an array depending on the data type at hand. setState is a function that’s used to update the state value. E.g. setState(updatedState).

Let’s use the useState Hook in a simple, functional component.

Let’s quickly explain how the above code works:

age has an initial state of 10 which we then call between the <p> tag.

The useEffect Hook accepts a function that it runs after each render. It’s commonly used for performing side effects. This can range from manipulating the DOM or Browser APIs or even fetching data from external APIs. The useEffect hook also helps us achieve capabilities in a function component previously done by React lifecycle methods. Think of the useEffect Hook as the combination of the componentDidMount, componentDidUpdate, and componentWillUnmount lifecycle methods. Besides, we can also set the useEffect hook to render based on specific value changes.

Here’s a basic rendition of the useEffect Hook.

The useEffect at render sets the new age value to 20. We also passed an empty array which will let the useEffect hook run once only.

There are also other Hooks such as useContext(), useMemo(), amongst others. You can have a look at the rest in the official documentation.

There are, however, two rules you should follow when using React Hooks.

Many Code IDEs like VSCode have an inbuilt linter that enforces these rules and more.

We will be fetching data from an external API with fake users data. As we’ve learned, this is a perfect use case for the useEffect Hook.

In the sample above, you can see how we’ve used:

Again in the video above, I’ve placed a console.log so you can see how we pulled out specific data to display.

We had fun! React Hooks are really powerful when used correctly. In conclusion, we learned what React Hooks are and the immense benefits they bring to developers. In addition, we also briefly examined the various types of hooks and the rules guiding their usage. Lastly, we created a simple React app that demonstrated how to use the useState and useEffect hooks.

If you’re feeling adventurous and want to build more apps with React hooks, check out our Stripe Checkout Integration with React article.

Here at Unimedia Technology we have a team of React Developers that can help you develop your most complex react Applications.